NOTE: I'm not responsible if your machine will show some smoke or stop working for good :P

Everyone is busy testing Lubuntu 13.04 Beta 2 to make sure we shall have yet again another successful release. Everyone has his/her own way of test and so do I :)

I'd like to share my experience in testing or my approach in testing. To be more specific, this is a bit of advance testing.

Have you ever wondered what is the real ability of your old machine? what could happen when your Physical RAM is being full used? how to produce a system lack? how to make your system slow? how to push your system to stop responding? how to do a heavy testing?

As you may know, each Lubuntu installation, at least, have two partitions: Root and SWAP. SWAP partition is very important and I advise everyone to use it even if you have large size of RAM. Please read this link.

And as you know, usually, if you have 512MB of Physical RAM, you need to set your SWAP Partition to 1GB.

What I do for a heavy real test, I turn SWAP OFF and put my system on a real heavy test. 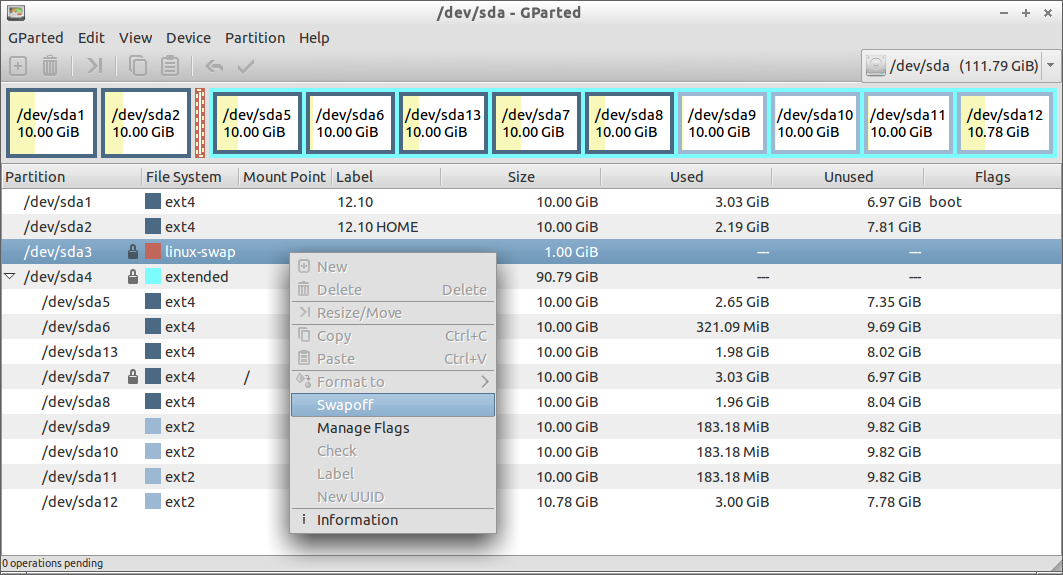 When you turn your SWAP OFF, you won't be able to use anything but the available space that your RAM has. So, if you have 512MB of RAM + 1GB of SWAP, when turning off your SWAP, you will have only 512MB of RAM. 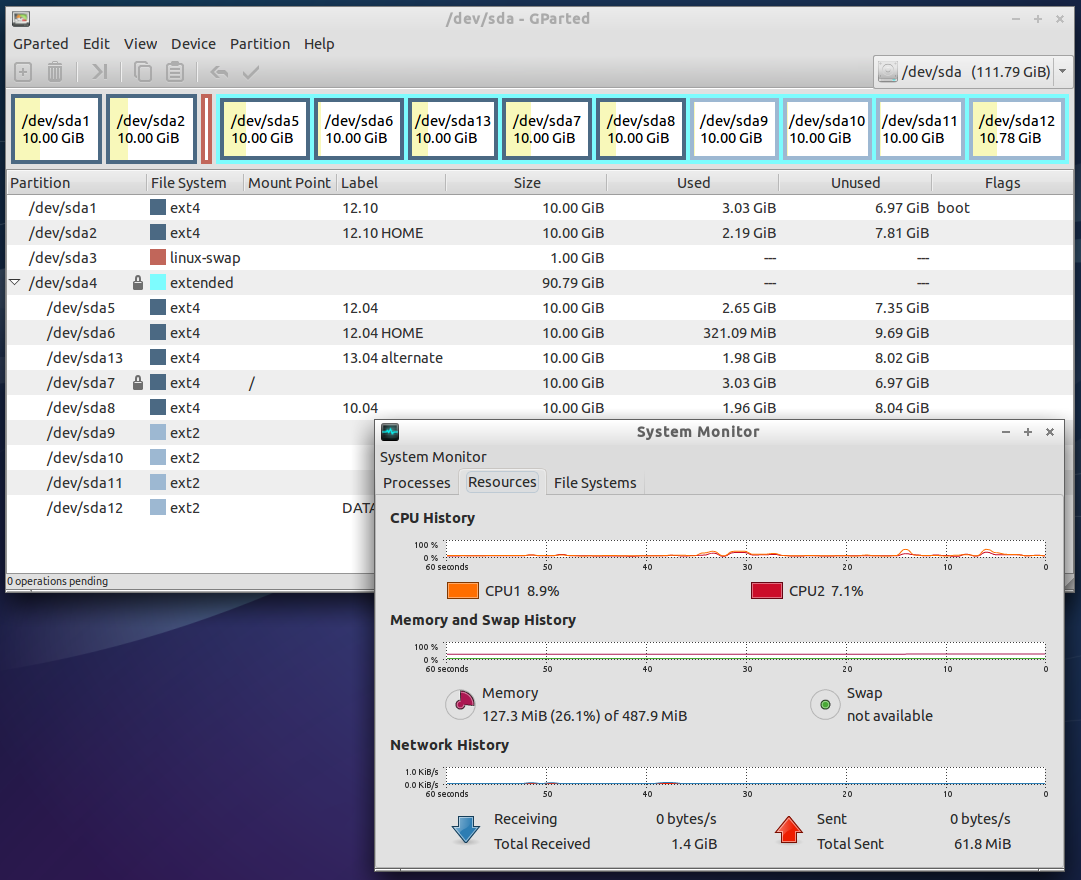 You can see on "gnome-system-monitor" that SWAP is not available. So, you are forcing your machine this way to use nothing but the available RAM.

This way, you can break your system easily, produce slow system, and if you open more application, your system will stop responding for sometime. This is what I call a heavy testing and you need to be aware that this is a bit of advance testing. 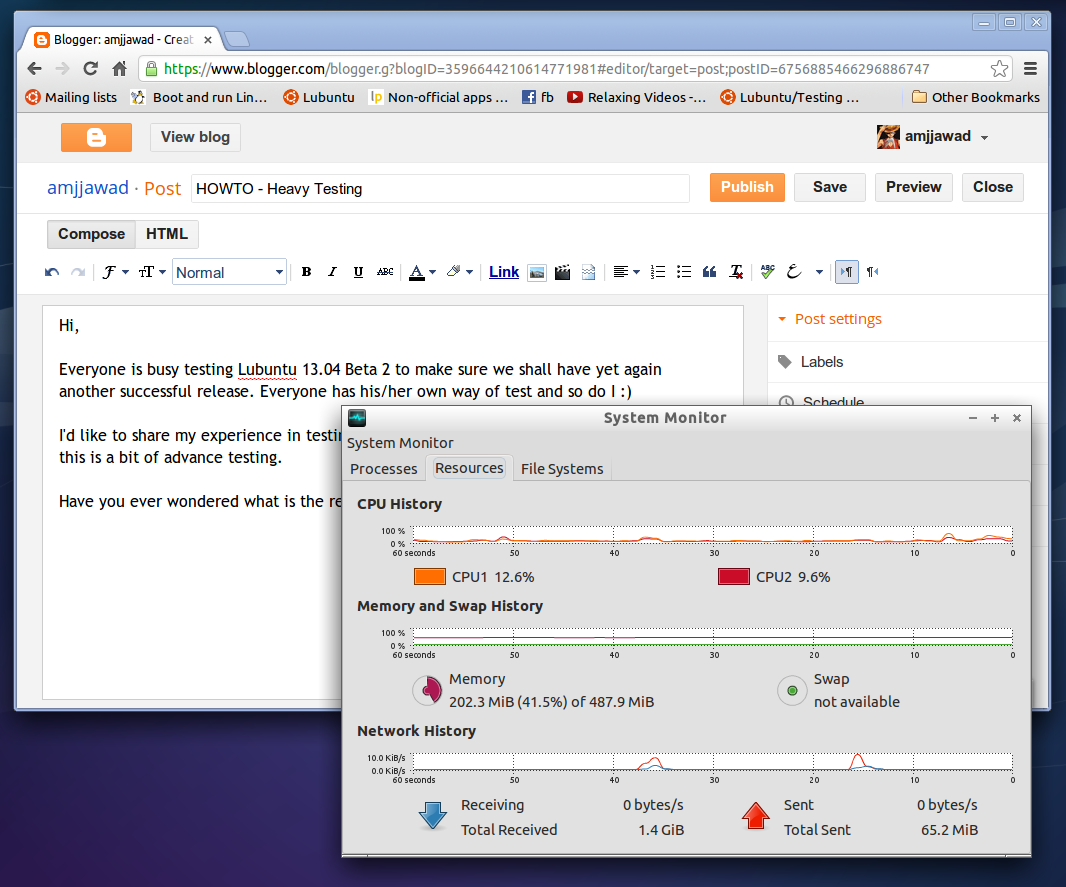 41% usage is fine and the system was very much usable and fast.

If you want to make it a bit worse, start opening more tabs or run Firefox side by side with Chromium :D
I'm going to do that and I really hope I won't see this: 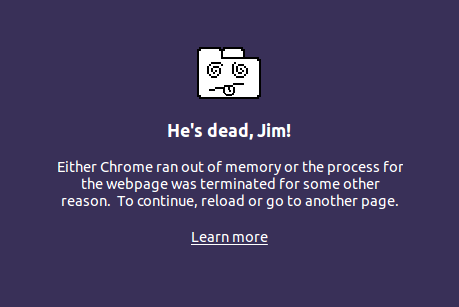 By the way, the above error "He's dead, Jim!" is a well-known issue with Chromium which has nothing to do with what version/release you are using, it is something with Chromium itself. Whenever there is Low RAM system, you need to expect to see this more often. 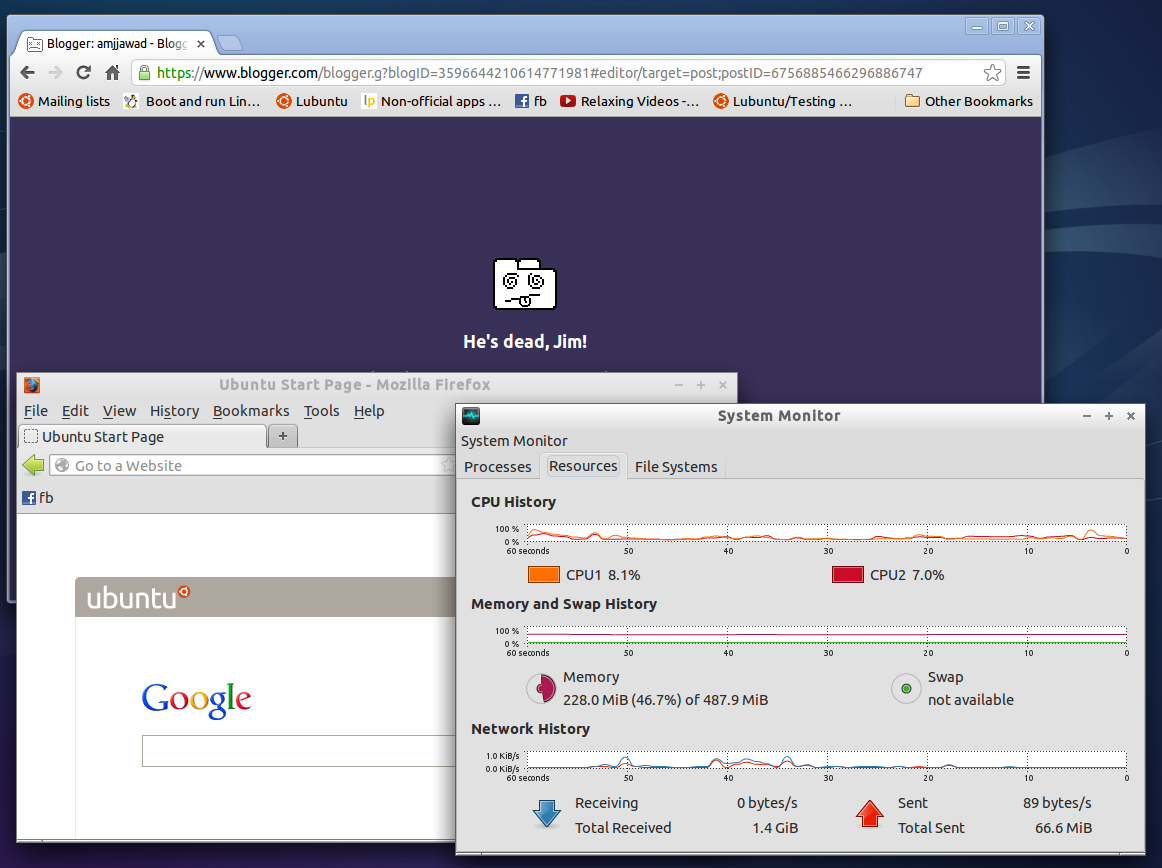 Congratulation, you just produced an error :P
However, this is a well-known issue and every easy to produce ;)

It is really funny that Firefox was on a Blank Page and did not take much but once I ran Firefox, Chromium Crashed.

This is a Screenshot after I closed Firefox: 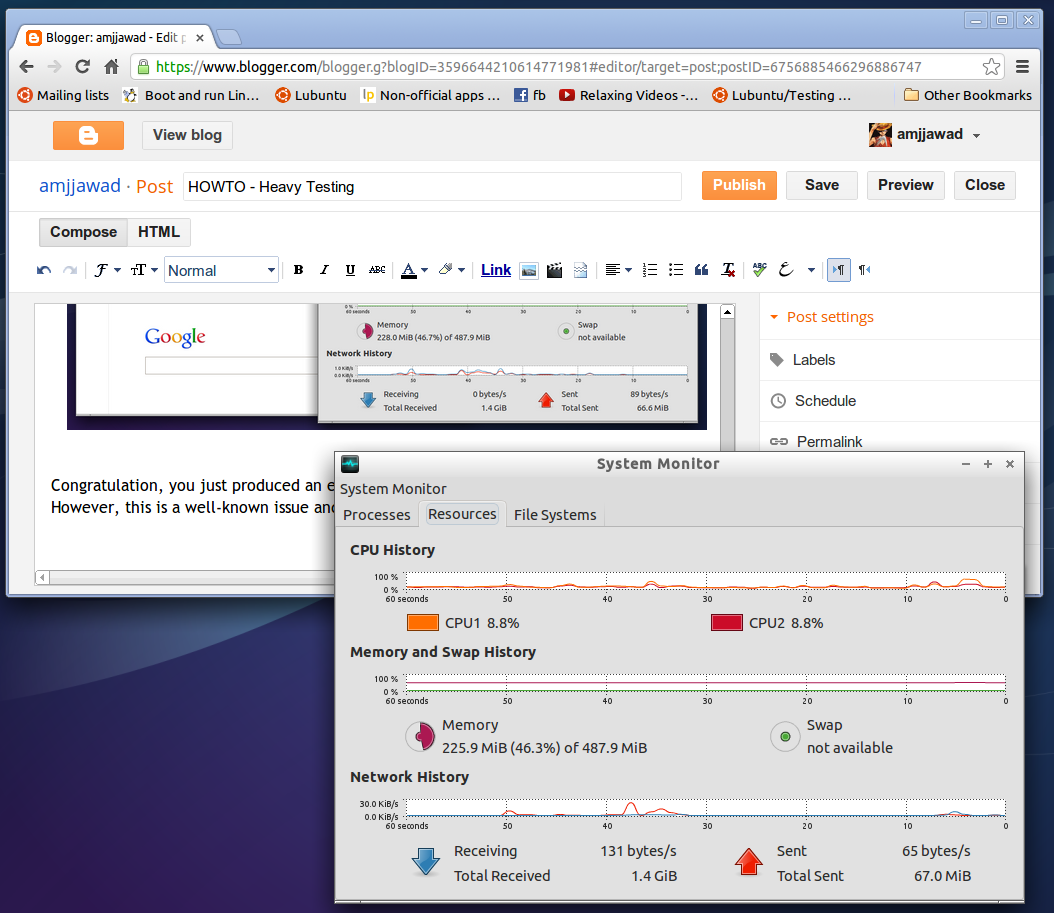 Yes, of course one opened tab on Blogger will use MORE RAM that He's dead, Jim error message but I'm just saying, there was no big deal to run Firefox as the RAM Usage did not jump to, for example, 55% :)

Now, you do know how to produce that error for example. Isn't this fun? 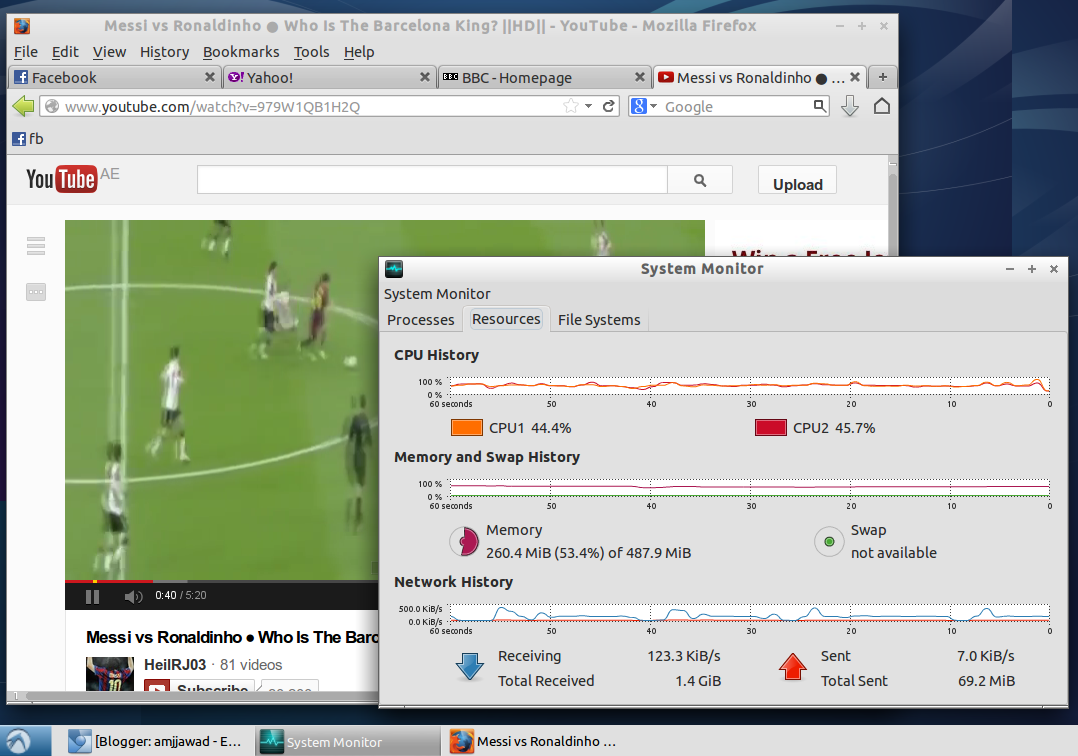 You can see I minimized Chromium and started Firefox with these 4 tabs and oh yes, a running video on YouTube :D

I did it yet again after I logged in to my desktop: 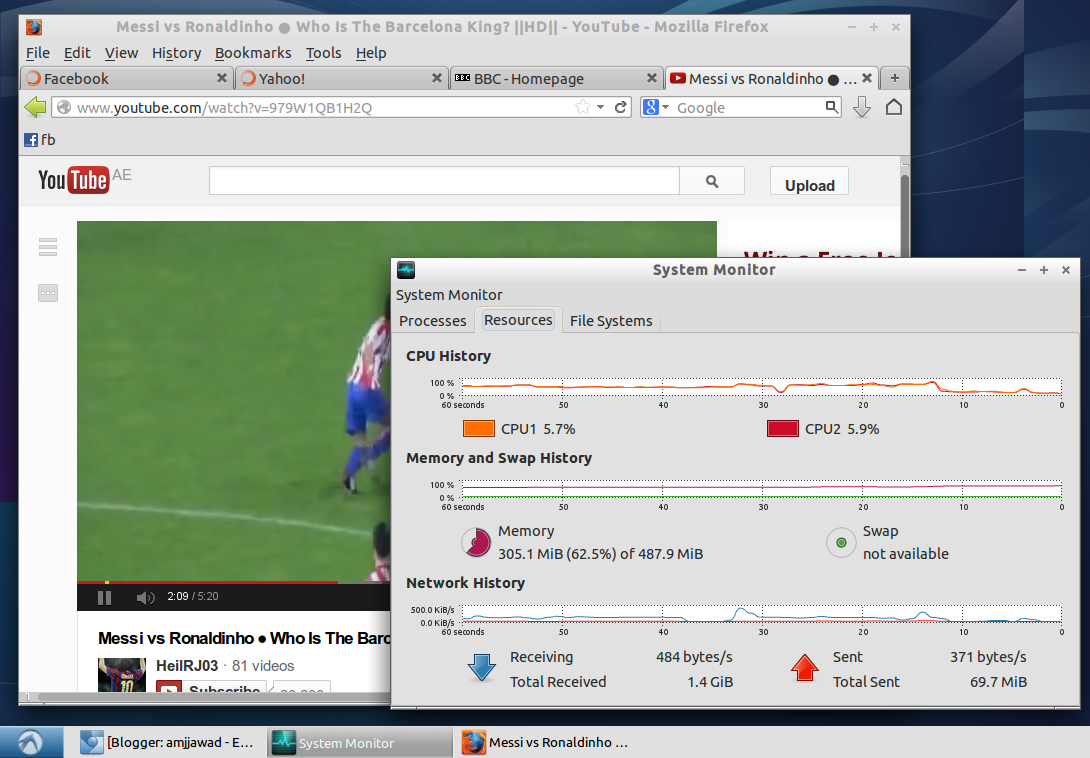 After I logged in, I started Firefox again and it did restore the 4 tabs all by itself.
Everything was fine and below 55% of used RAM but when I clicked on each tab, it was reloading and when I clicked on the Facebook Tab, the machine started to be so slow and the sound of the HDD was so much obvious and clear :D

I wanted to produce another system crash and indeed, while I was doing a search for a Lubuntu Page on Facebook, the Memory Usage jumped to 68% and again, when I tried to take a screenshot, this time with "scort" the default tool that comes with Lubuntu, it gave me the black screen and crashed. When I logged back in, I couldn't even find the screenshot. So, I'm sorry, couldn't capture the last moment before CRASH! :D

NOTE:
Your system doesn't have to be crashed when RAM Usage will reach 90% for example. As you have seen, it crashed even before 70%. IMHO, this is a nice feature on Linux. Your OS won't push it too hard and if you ask me, this is really smart. Think about it as a sign or warning for you to tell you that: Hey, I can't handle that any longer - do something.


You may think I'm crazy but this is a real fun. This how real test should be :P

I hope that was helpful.
I was always wanted to write such a simple guide but never had time. I'm glad I finally did.

Thank you for reading :)